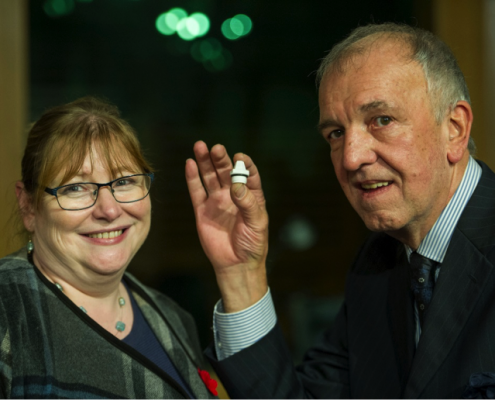 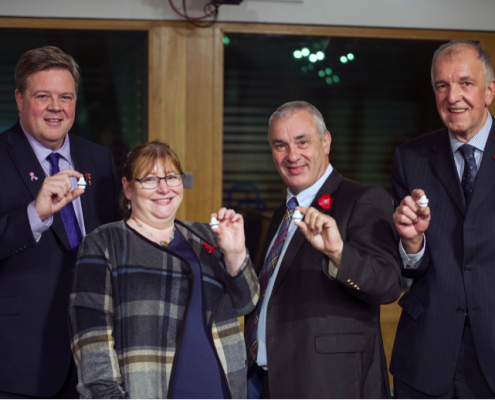 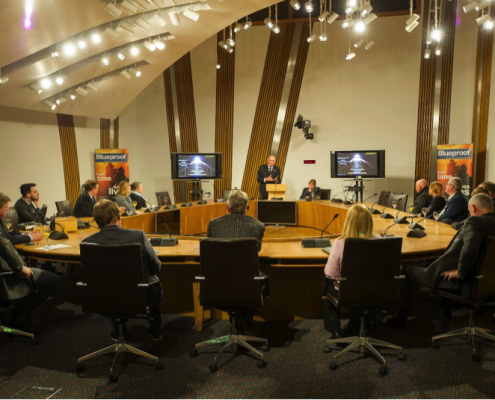 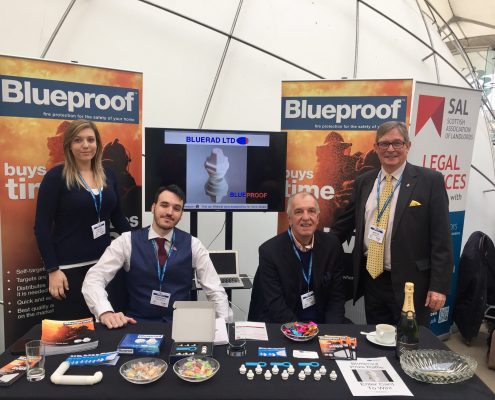 As the Scottish Landlord’s Day 2016 comes to a close Bluerad are taking their ingenious product ‘BLUEPROOF™’, to Holyrood for the ‘Fire Safety in the Home’ Parliamentary Reception hosted by Clare Adamson MSP the Convenor of the Scottish Parliament Cross Party Group on Accident Prevention and Safety Awareness.

The Blueproof™ is a fire suppression device made out of a high tech copolymer smart material that is designed to release water where and when it is needed most in a fire. Designed with a thin wall, the device forms a nozzle on the surface closest to the heat source and upon activation releases water and tracks the movement of the fire. The water expands to create vapour, absorbing the energy of the fire and thus reducing temperatures and holding back the spread of fire. Dave Atkinson, co-inventor and founder of Bluerad said, “I was impressed with the interest that was shown in Blueproof™ on Tuesday at Landlord’s Day and last night at the Parliamentary Reception. The importance of a fire safety device has been recognised by ALARM as the winner of their 2016 Product of the Year Award.”

Clare Adamson said, “As someone who wants to ensure the widest possible sharing of information on all developments in safety and safety devices, I am pleased to have hosted this Reception shining a light on the Blueproof product and current trials on its impact with Osprey Housing and child care providers, The Common Thread Group, who also contributed to the event.”

The Common Thread Group, who have been trialling Blueproof™ in their homes and schools throughout Scotland were also in attendance and James Lochrie, Chief Operating Officer of Common Thread said: “The safety of the young people in our care is our utmost priority and the effectiveness of the device gives us all comfort knowing that an additional fire safety system is in place in our homes.” As Bluepfroof™ has now been successfully installed in Nottingham City Homes and being trialled by Osprey Housing in Aberdeenshire we hope to see it spread across to other councils and housing associations in the near future.

In early November the team went to Dynamic Earth to take part in the National Landlord’s Day 2016 which was very well attended and Blueproof attracted much interest from those being introduced to the product for the first time and those who had seen it at its initial launch in 2015.  A hotel chain took particular interest and has made the first moves to installing the device.

For those with specific interest in rented property Blueproof is very appealing as an additional fire safety device.

Buy Blueproof with a huge discount of 50% in honour of winning the Alarm award 2016.

How to protect a city against fire link
Scroll to top