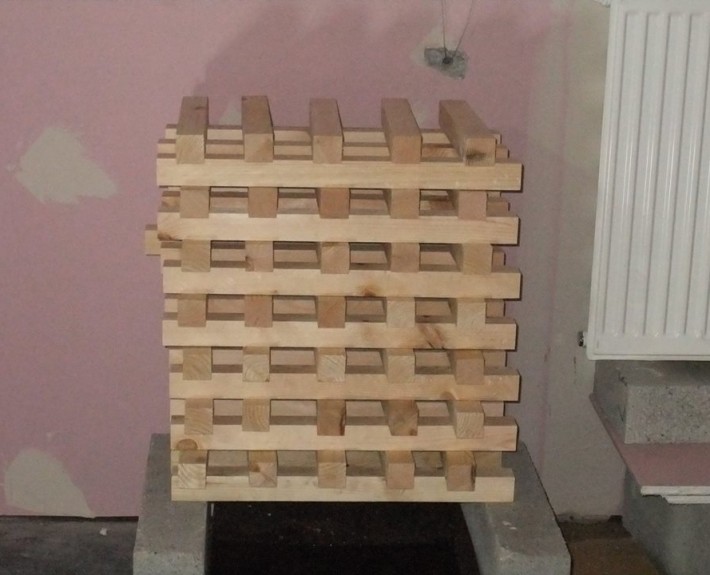 This is the wooden crib that’ll be set alight.

The results of the full-scale fire testing of the Blueproof device at one of the UK’s most qualified testing facility laboratory are spectacular and proved the following:

We established that the device, once activated, reduced the temperature profile of a fire dramatically during operation. With a device fitted in the home, on the outbreak of fire, the temperature falls to survivable limits and the oxygen content rises significantly to effect escape, evacuation, rescue and recovery.

During a fully developed fire, the threat of blowback and rollover was eliminated. A blowback is the point when the gases in the fire reach a critical point, spontaneously ignite and can then explode into the next room of a house.

Very little water was used to achieve the results. After the onset of the fire cooling water vapour became the largest component of the exhaust gas mixture during operation. That meant that it was physically possible to touch and feel the exhaust gas and detect the moisture on the palm of the hand. You could also observe the smoke plume rapidly changing colour as the water vapour became entrenched.

Results showed that the oxygen levels were not heavily reduced by the toxic smoke. This effect would ultimately be carried throughout a structure increasing survivability levels and allowing people to breathe.

What we achieved on this date in terms of active fire protection, was of historic importance to the fire protection industry. We have proved quite categorically that there is now a device, that once fitted in the home, will protect, not only the general public, but also the fire and rescue services as they undertake their duties. It could be ‘the difference between life or death’.

Blueproof is an extremely effective way of protecting homes at a very small price.

We’d like to thank everyone whose help made fast tracking this project possible.

Check out the exciting pictures above of this momentous day. Don’t forget to hover over the image for inside comments.

Blueproof available to the public
Scroll to top